„TINOX R-2280, a high-performance SP-rutile TiO2 pigment for plastic applications gives outstanding optical properties and is also optimized due to post-treatment for required use at higher process temperatures.“

Organic post-treatments of TiO2 pigments generally improve dispersibility because deagglomeration and wetting of the pigment surface are promoted. Undesired interactions between the polymer and pigment can be suppressed and, above all, the demands on shear forces in the dispersion process are reduced. This leads to maximum optical properties and the most efficient use in the plastic end product. Inorganic post-treatments are mainly carried out to improve certain properties of the end product and also improve the dispersion properties. By forming a barrier between the titanium dioxide surface and the matrix resin, they inhibit undesirable chemical reactions.

“The special organic post-treatment of TINOX R-2280 improves the wetting behavior in extrusion process. The applied inorganic aluminum post-treatment also contributes to this.”

The general qualitative statement that a TiO2 pigment is provided with inorganic and organic post-treatment is not sufficient to derive excellent process capability in the extrusion process. Organic post-treatment substances that have been applied to a high degree can separate from the TiO2-pigment despite conventional process temperatures and migrate to or near the surface of the pigmented plastic. If this happens, the product properties and also the state of dispersion are impaired. Aluminum compounds are usually used for the inorganic post-treatment in amounts of 0.5 to 4%, calculated as Al2O3. An Al2O3 posttreatment is compatible with all common binders and is unproblematic from this point of view. Nevertheless, a portion of “crystal water” can outgas, especially at elevated process temperatures, whereby technically a portion of water vapor forms in the melt. For this reason, it is advantageous if plastics TiO2 grades have a not too high aluminum oxide post-treatment at process temperatures above 270 ° C.

„TINOX R-2280 was developed taking into account all expected interface interactions. The low volatile components of TINOX R-2280, tested at high temperatures, clearly demonstrate the successful optimization with regard to the type and amount of post-treatment. The optimized aluminum post-treatment in particular reduces the occurrence of “lacing” in the production of thin foils.”

Increased fine particle size of a pigment also requires higher dispersion energy input or longer residence times of the pigment in the shear zones. The higher number of agglomerates of small sizes requires a higher probability of staying in the dispersion process in order to completely disperse the TiO2 pigment and to fully utilize the performance of tinting strength and opacity. The use or the modified addition of effective process additives opens up possibilities for optimizing the dispersion process. However the effort of renewed evaluations and the control of the impact on further subsequent process steps and end products are good arguments that such activities are usually not the top priority. The energy input required for dispersion can be controlled via the process parameters speed of the extruder screw and the temperature curve along the extruder screw. Regardless of whether extrusion premix(1) or split-feeding(2) process, pigments are incorporated into a plastic melt in stirring screws of different temperature zones. Agglomerates are dispersed faster, the larger they are, the higher the shear rate and shear stress and the lower the agglomerate strength. The extrusion process runs with an increasing temperature gradient over the zones in which the materials are drawn in, over into the zone of melting / plasticizing and finally into the homogenization zone in which the actual dispersion process takes place due to shear forces acting on the melt. The result of the dispersion is determined, among other things, by the input of the mechanical dispersion power. The local temperature and other process variables such as the torque built up are control variables for the mechanical energy input.

“The high optimized fine particle size of R-2280, which leads to the excellent bluish pigment properties, may require an increased energy input into the extrusion process in certain applications. Increasing screw speed leads to a shorter residence time and thus to a reduction in the probability of agglomerates staying in the shear zones. For this reason, a slight reduction in the temperature in suitable zones of the screw can lead to improved dispersion due to higher viscosities of the plastic melt and the associated increasing shear stresses.“

Figure 2: Influence of the screw speed on the dwell time T. After adding a tracer, the optical change at the end of the extruder screw is detected. Energy input due to increased speed (shear stresses) of the extruder screw is offset by energy reduction (shear stresses) due to the shorter dwell time of the agglomerates in the shear zones. Lowering the temperatures in suitable extruder zones, on the other hand, would produce higher melt viscosities and the associated higher shear stresses at a constant speed, and this with the same dwell time. [ColVisTec AG].

TINOX R-2280 was developed taking into account all expected interface interactions. The low volatile components of TINOX R-2280, tested at high temperatures, clearly demonstrate the successful optimization with regard to the type and amount of post-treatment. In particular, the optimized aluminum post-treatment of R-2280 reduces the occurrence of “lacing” in the production of thin foils. Fine TiO2-particles tend to agglomerate. If the TiO2 agglomerates are not dispersed in the plastic matrix, the positive properties such as lightening capacity and opacity cannot develop fully. For this reason, the complete and homogeneous dispersion of titanium dioxide pigment in plastics is an important task in the production of TiO2-pigmented plastics. TINOX R-2280 is a rutile TiO2 pigment from the sulfate process which produces bluish optical properties in the pigmented plastic that are well above average. The bluish optical properties are generated by an optimized and finely divided particle size distribution. Numerous variations within the screw configuration of the dispersion zone can be carried out with relatively little effort and the influence of individual shear elements on the process variables can be determined. An optimized and high fine particle size of TiO2 pigment particles, which leads for example to the excellent bluish pigment properties of R-2280, may require an increased energy input into the extrusion process in certain applications. By control of screw speed and srew-temperature during the extrusion process the dispersion result can be controled.

1) In the „premix process“, all raw materials are usually cold mixed using different mixing methods. In addition to cold mixing, the hot mixing process is practiced, albeit more rarely. The premix is usually metered volumetrically via screw conveyors into the extruder feed. Due to the high pigment concentrations, the use of powdered polymer is common to ensure statistical particle distribution. In addition, granules take significantly longer to melt in the extruders and, through pigment compaction in the feed area, increase the risk of irreversible agglomerates that can no longer be shredded by shearing.

2) In the „split feeding process“, the individual components are added to different extruder openings January 10th 2020 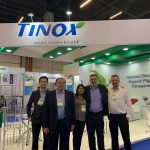 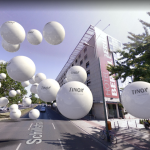